One skillet Italian Sausage and Pepper with Rice

Posted on December 8, 2019 by Peter Bocchieri

Fads, short lived popularity of objects or behavior that quickly fade away. Can you think of any you experienced as a child?  Thinking back  one  comes to mind,  and it involved my brother Richard. He would get obsessed with things. Back in the early 60’s the song Wipe Out was playing on the radio. My brother must have been in high school. I could remember him driving everyone in the house crazy while he played the drum solo of wipe out with his hands slapping at the dinner table, dining room table and any other flat surface he happened to be sitting near.  Glasses would shake, plates would rattle and my sister’s eyes would roll. She  would scream and tell my mother to make him stop. Of course, he only did it louder, until my father intervened. You didn’t want him to tell you a second time to stop. That year for Christmas, my mother bought my brother Richard a snare drum. Really. My sister played the piano, I dabbled on the keyboards, and my brother played the snare drum. The drum remained in the basement. Honestly, I think my brother sounded better playing Wipe Out with his hands on the kitchen table than with the snare drum.

In addition to drum sticks the snare drum came with a set of brushes so my brother was able to tone down the noise and produce a gentle shuffle sound from time to time, with and without the snare sound. Nothing ever came of my brother’s drumming interest. After Wipe Out, there wasn’t much left of his repertoire. He might have asked for a cymbal or hi-hat but my mother realize the mistake of getting him the snare drum and ignored him. Another passing fad. I do remember one year my brother got a set of bongos. That too passed.

Hula hoops were another fad, but more popular with the girls. I have to admit, they were much better at keeping their hips in motion and keeping that hoop up then the guys. And then one summer someone bought a spinning top. Like any other fad, it all started with one kid. Within days, everyone else on the block were trying to spin tops. What frustration! Point up, point down, over hand, under hand, we all tried different techniques to get that top to spin. Those that gave up came back the next day with a Duncan YoYo.

And who can forget Click Clacks? They consisted of two stone hard acrylic balls which hung on either end of a heavy string. The two balls would swing apart and together, making the loud clacking noise that gave the toy its name. Once in full swing they would hit each other in the up swing and down swing.  Until the swing lost its course and they clonked you in the head. I believe they finally were banned in the 80’s, going the way of the Lawn Darts. A much less deadly fad was the wooden paddle ball. At least the ball at the end of the rubber band was a soft pink ball. So a shot to the face didn’t leave any marks.

This dish will not disappoint. Simple ingredients, bursting with flavor.  My son Joseph texted me this the other day and said I should try it. I trust my son. He knows good food. So I collected the ingredients and made it for a Saturday night supper. It was delicious. Easy to make, easy clean up because it’s made in one pot, and sticks to your ribs. This one is a keeper, add a side salad and your meal is complete. 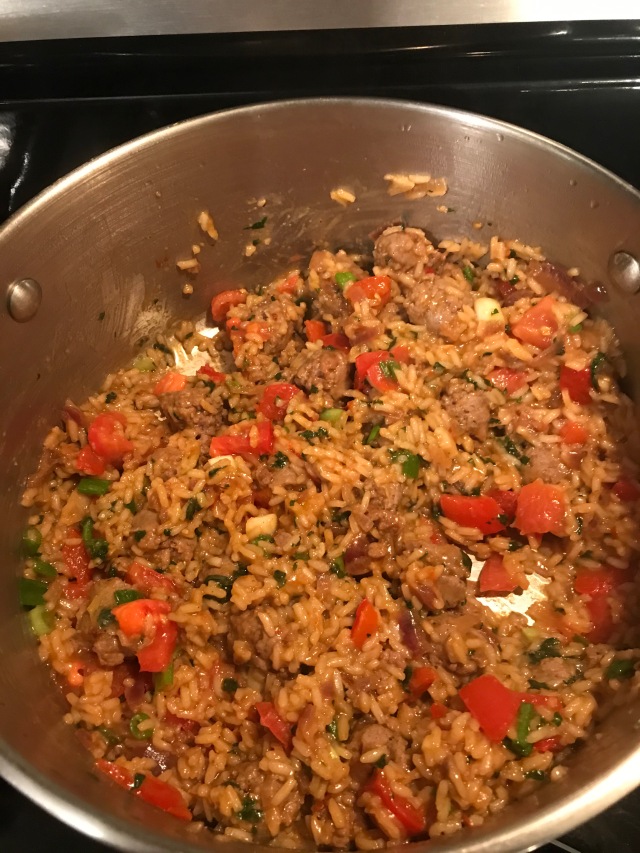 Italian Sausage and Pepper with Rice

In a large skillet or sauce pot with a lid, heat olive oil over medium high heat. Add the onion and salt and cook down for 3-5 minutes. Add the red bell pepper, paprika and garlic, stirring and cook for another three minutes. Turn the heat to high and push the vegetables to one side of the pot to brown the sausage. Pick off little pieces of the sausage and place in the pot. Stir till the sausage is browned and the veggies start to caramelize.  Add the raw rice and red pepper flakes and cook while stirring for about two minutes.  Deglaze the pan with the white wine, stirring up any brown bits on the bottom of the pan, for about a minute. Add the chicken broth and stir to incorporate all the flavors. Bring to a boil, turn down the heat to low and cover. Cook for about 18 minutes. Check and stir to make sure the rice is not burning. When the rice is cooked and all the moisture has evaporated, take off the heat and add the green onion, tomato and parsley. Stir well. Cover and let sit for about five minutes before serving.

Peter was born and raised in Brooklyn, NY and is a second generation Italian-American. He has a degree in Journalism from Long Island University and is an avid photographer, gardener and pet owner. Now that Peter is retired, he is relaxing at his home in North East Pennsylvania and cooking for his sons, Michael and Joseph, family and friends. Peter's passion for food was inspired by his Mother's and Grandmother's cooking, but at the age of 10 Peter felt he could do it better himself, so he did.
View all posts by Peter Bocchieri →
This entry was posted in Pork, Rice and tagged Italian sausage, one pan recipe, Pork, Rice. Bookmark the permalink.

5 Responses to One skillet Italian Sausage and Pepper with Rice