Posted on February 6, 2011 by Peter Bocchieri

The first time I made rice balls I didn’t cook the rice just right and what resulted was a mess of mushy rice that would not hold together no matter what I did. I got so frustrated that I dumped the whole mess in a roasting pan and discovered the lazy man’s version of rice balls. Some of our best inventions come from mistakes and this is the result of one of them. I guess I picked up one of my grandmother’s traits of never waisting anything. I could have easily dumped the whole thing in the garbage. She would never have dreamed of it.

Many cooks are intimidated by making rice balls the traditional way. It could be a messy venture trying to form the sticky masses of rice into a ball then frying them. And it’s also very time consuming.  Others just try and stay away from fried foods, for health or other reasons.

For those reasons I decided to share my “rice ball mistake” and put together a version of “rice balls” that you bake in the oven as a casserole. You can still enjoy the great taste of the traditional rice ball without the fuss. And it’s very easy to make. All the ingredients are the same, with a few changes here and there. I call it Arancini al Forno. This could be served as a first course or side dish with meat or fish.

To make the filling, put the oil, onion and garlic in a medium skillet and cook on medium heat until the onion is soft.

Add the beef to the skillet and brown, breaking up and stirring for about 10 minutes. Add the white wine and cook down for a minute.  Add the tomatoes, salt and pepper. Simmer on low heat, stirring occasionally for about 30 minutes, or until thick. 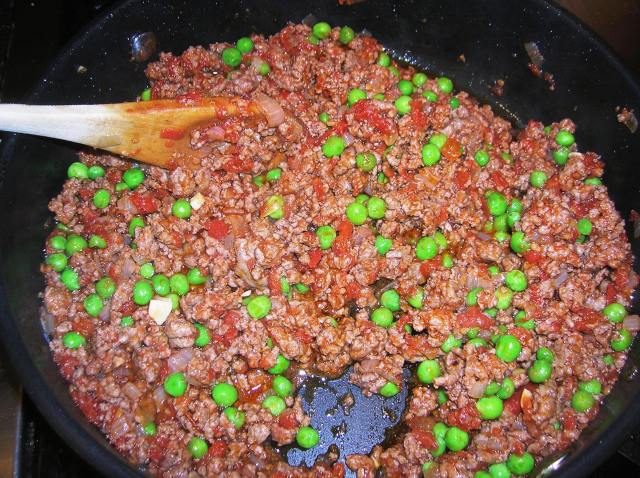 Add the peas and cook 5 more minutes.  Taste for seasoning. Set aside to cool.

Bring the broth and saffron to a boil in a large pot. Add the rice, butter and salt to taste. Cover, reduce the heat to low and cook until  tender, about 19 minutes.

Remove from the heat and stir in the cheeses. Allow the rice to cool for at least 10 minutes, stirring occasionally, then stir in the egg yolks. Add about a 1/2 cup of the sauce mixture to the rice and stir. 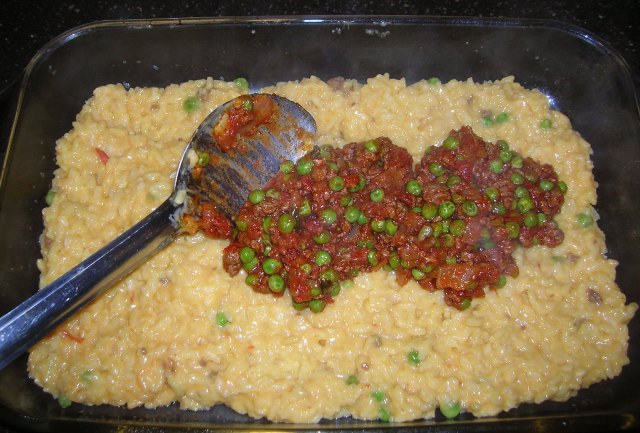 Spray a medium roasting pan or Pyrex baking dish with non stick cooking spray.  Layer half the rice on the bottom of the roasting pan. On top of that add the chopped meat and peas, covering the entire layer with the sauce. Sprinkle on top of the sauce the provolone cheese. Next layer on top of the sauce the remainder of the rice. Brush the top of the rice with the egg white. Top with the  bread crumbs and sprinkle some extra virgin olive oil over the bread crumbs or use an olive oil cooking spray to cover the breadcrumbs evenly.

Bake, uncovered, in a 350 degree oven until the bread crumbs brown, about 30 minutes. Allow to cool for about 5 minutes before cutting into squares to serve.

Peter was born and raised in Brooklyn, NY and is a second generation Italian-American. He has a degree in Journalism from Long Island University and is an avid photographer, gardener and pet owner. When Peter is not out selling, he is relaxing at his home in North East Pennsylvania and cooking for his sons, Michael and Joseph, family and friends. Peter's passion for food was inspired by his Mother's and Grandmother's cooking, but at the age of 10 Peter felt he could do it better himself, so he did.
View all posts by Peter Bocchieri →
This entry was posted in Rice and tagged arancini al forno, baked rice, rice balls. Bookmark the permalink.