A lot has happened since my last post. So here is the “Reader’s Digest” version. I left New York, sold my house and moved to North East Pennsylvania. Found a job on a daily newspaper that covers Wayne and Pike county and bought my retirement house on a lake, next door to a local tavern. Can it get better than that?

I’m planning on raising some chickens, ducks and guinea fowl. The guinea fowl are great for depleting the tick population that thrives too well here. I have an unfinished cellar, with a stacked stone foundation,  that is ideal for curing and storing meats, canned goods and root cellar vegetables. Did I mention I’m next door to the local tavern?

The view from my back porch.

This area couldn’t be more different from my roots growing up in Brooklyn, but there are many similarities. In Brooklyn your block was your town and your neighborhood was an extension of that town. Here it’s no different. Neighbors are friendly and helpful. They are all God-fearing folks and would give you the shirt off their back if you had the need. I work in a cute little town called Honesdale. I found my Mayberry. Folks here have roots, deep roots. Many have been here all their lives, generations. It sets up a down home base, like my block in Brooklyn, everyone knew each other, everyone was friendly. There is a local market here called Clark’s Sunrise Market. It’s run by three generations of family. We had places like that in Brooklyn, one called Monzelli’s, a family run market, run by three generations. Went to school with their son. His grandparent’s knew my Grandparents and his mother and father knew my mother and father. They all grew up in the neighborhood, went to school there and worked there. Honesdale is the birthplace of the Steam locomotive, the song “Walking In A Winter Wonderland” was written by a gentleman that lived on Church Street, just a few yards from my office. And right across the street from my office is the first headquarters of the children’s Highlights Magazine and still in use today.

When I first moved up here I felt like a fish out of water until I realized how similar it was to growing up in Brooklyn in the mid 50’s. First thing I did was search out my comfort foods. Where to shop, where to buy pizza, bagels, any good Italian restaurants, deli’s, was there a good Chinese Restaurant here? Any Kosher deli’s? I could tell you one thing, no one delivers. And nothing is close. This is farm land and acres of state hunting grounds, rivers and streams, huge lakes like Wallenpaupack, and seasonal. After Labor day three-quarters of the population leaves. Off season it’s quiet. But come Memorial day, look out. It never really gets that crowded, but you notice different folk arriving and shopping in the stores.

I’m about 15 minuets from a town called Milford, PA. And that’s where I found Fretta’s. At first I couldn’t believe it. Fretta’s started out in Little Italy at about the time my Grandfather arrived there from Italy. They moved to Brooklyn, on 86th Street in my neighborhood and was there for many years, until the grandson, who was living in Staten Island, decided to take the family business to Milford.

This place is the holy grail of Italian pork stores and it was right here in Milford. The moment you walk into the place you smell the pungent aromas of the homemade soppressata, capocollo and beef braciole hanging from the rafters curing alongside the imported provolone and prosciutto hanging displayed. Not to mention all the homemade fresh sausage, pinwheels, prime cut steaks and chops. I died and went to heaven and it was right here in Milford. Could I be any closer to home? And just up the road is a place called Jorgensen’s Dimmick Inn, an old world tavern revived by a couple of Brooklyn boys from Bay Ridge. They even have an item on their menu called the 79th Street Burger. Milford has to be the 6th borough. I feel closer to home up here in NEPA than I did in Rockland County New York.

There is also a different culture up here than I was used to in New York. One Monday morning I was driving to work and when I passed the local high school I noticed it was closed. I couldn’t imagine what holiday it was for the school to be closed. Did I miss something? When I got into work I asked my coworkers why the school was closed. They look at me like I was an alien and said, “it’s the first day of hunting season, the schools always close first day of hunting season”.  Silly me for not knowing that. Almost everyone hunts up here. Not for trophy, but food. Although if they bag a six pointer it’s unlikely they will not display it. Our newspaper runs a Big Buck contest every year and the residents bring their bucks in to have us judge who’s the biggest. From the first day of the contest, beginning at 8am, people were driving up with their entries. I couldn’t believe the range of hunters, from 16-year-old girls to seasoned huntsmen that have been doing this for decades. No wonder they close the schools that day. Everyone is out hunting.

These are good people up here. They respect God, country and each other. But they don’t know how to make a good Pizza. That was my next quest. Finding good pizza. There is a pizza style here that is not New York Style Pizza. A hundred year old hotel called the Waymart Hotel has been making pizza for as long as it’s been in existence. And is famous for their square pie. Legend has it Italian immigrants settled here mining coal and as many immigrants do,  make the food of their country. But they had to settle for ingredients that was local and the “Old Forge” style of pizza was born. Nothing like NY pizza, the cheese blend is just that, not mozzarella but a blend of different cheese. I have to say, it was tasty, different, but not New York Pizza. I came across a place called Mike’s pizzeria not far from my house and discovered the owner is from Nutley, New Jersey. Not bad pie. For now it’s my go to pie. But I’m still searching.

All in all I now call NEPA my home.  I’m only an hour away from my son Joseph and an hour and a half from my older boy and his wife, Michael and Jess. It’s a two-hour ride into Manhattan, Brooklyn and Staten Island, so I’m close enough for visits. Scranton is only a half hour away so I still need to explore that.  It’s nice to walk out my back door and fish in my own lake, and pass farmland with cows grazing in the fields. And live near towns where the people are friendly and all know one another. Not to mention, I’m right next door to the local tavern.

We had a bakery in Brooklyn called Termini’s. They made great bread, cookies, cakes, pizza and these sausage rolls. They only made them on Saturdays so it was always a special treat for me when my mother or grandfather would pick up bread from there and come home with these sausage rolls. I never bothered heating them up, but ate them right out of the bag my mother brought them home in. Their pizza was also a treat, and I ate that cold as well. It was THAT good. 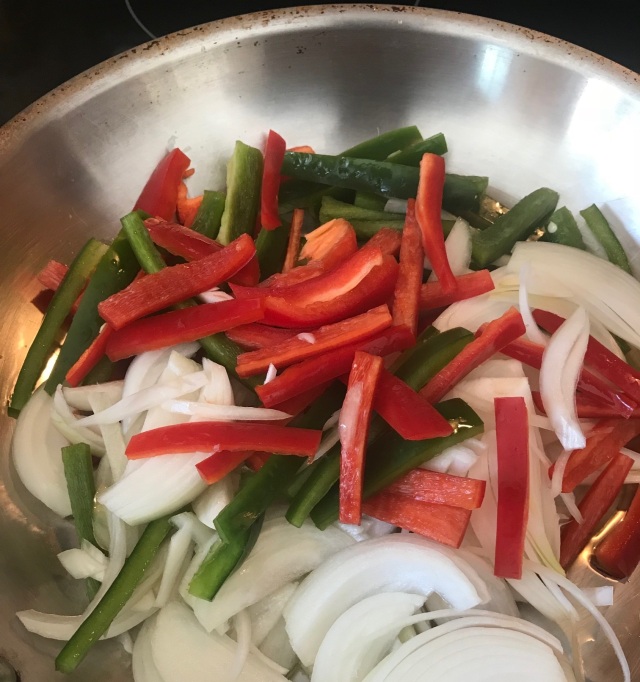 In a medium fry pan heat 3 tablespoons of olive oil over medium heat. Add the red and green pepper and sliced onion and saute for 12 minuets until soft. Add the chopped garlic and cook for another 2-3 minutes. Add salt and pepper to taste. 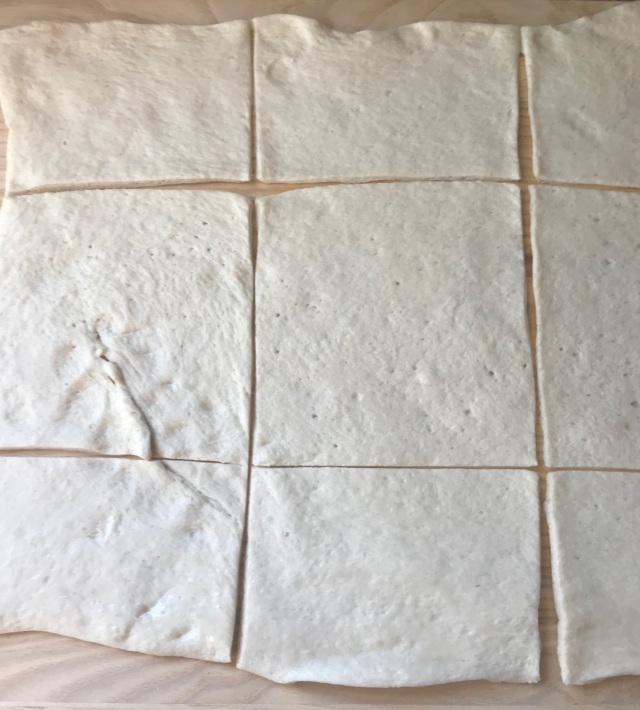 Roll out the pizza dough and cut into 9 rectangles. 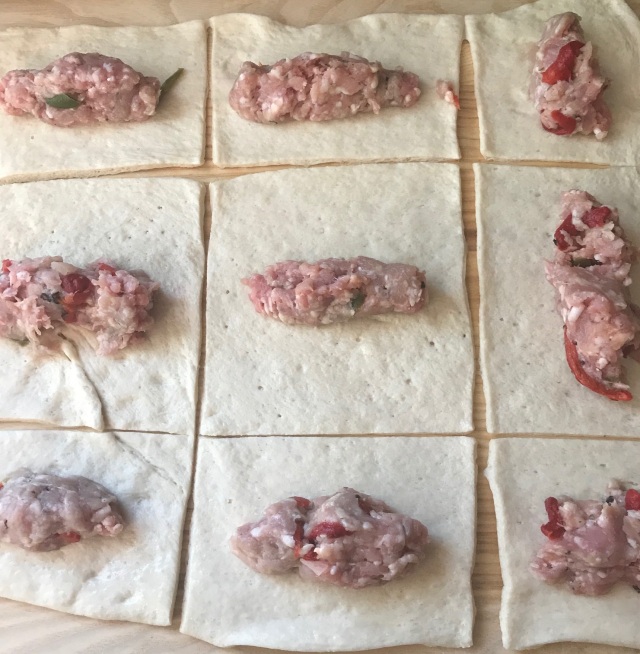 Break off a piece of sausage and form it into a log to fit inside the sough.

Top with the sauteed peppers and onions , and sprinkle of grated provolone. 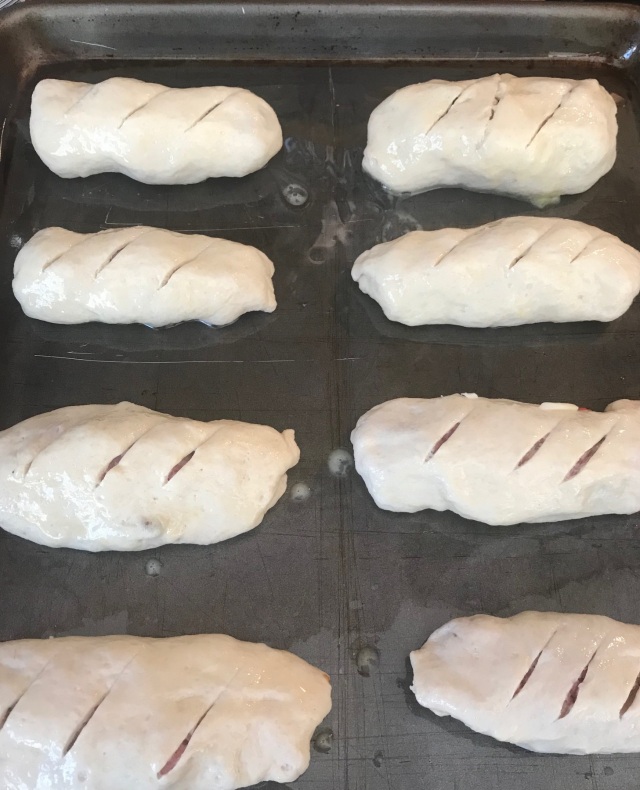 Fold the little packet into a roll and pinch the seams shut. Place seam side down on an oiled sheet pan or on parchment paper on top of the sheet pan.  Brush with egg wash and score each roll with three slits.

Place in oven and cook till golden brown, about 20-25 minuets. Cool slightly, remove from pan and serve.

Peter was born and raised in Brooklyn, NY and is a second generation Italian-American. He has a degree in Journalism from Long Island University and is an avid photographer, gardener and pet owner. When Peter is not out selling, he is relaxing at his home in North East Pennsylvania and cooking for his sons, Michael and Joseph, family and friends. Peter's passion for food was inspired by his Mother's and Grandmother's cooking, but at the age of 10 Peter felt he could do it better himself, so he did.
View all posts by Peter Bocchieri →
This entry was posted in Antipasto, Bread, pizza, Pork and tagged sausage roll, sausage stuffed bread, stuffed bread. Bookmark the permalink.