Posted on January 4, 2015 by Peter Bocchieri

My children are responsible for placing me on different paths in the culinary world. Their encouragement and positive reviews also make all the work and preparation worth it. Nothing is more rewarding to the chef than to have someone appreciate the food you make. It’s the only reward you need. Years ago my sons got me a smoker. That summer I was having a ball experimenting with smoked meats and fish and telling the whole neighborhood that smelling hickory smoke all day is a  good thing. The most recent addition to my kitchen arsenal is a slow cooker.  My children got me a slow cooker for my birthday this year. I have not had one since the 70’s, and back then we called them crock pots. Today’s slow cookers come with some nice modern electronic features that helps you control and hold the cooking process. But in the end, all it does is slowly cook your food at low temperatures resulting in a tender, fall off the bone meat dish with tons of infused flavor. Mmmmmm!

So naturally, I’m now experimenting using my new slow cooker with some time-tested recipes I know. Braised short ribs heads my list of things to try. So here you go. What’s not to love about short ribs. If prepared properly, it’s one of the most tastiest, beefy , mouth-watering morsels you can put in your mouth.

I thought it would be fitting to include my new slow cooker in my short rib recipe and put it to work.  This dish takes two days to prepare, so just know, in the end, it’s worth it. Once prepared and cooked you can chill your short ribs for a few days before you heat and serve them. They only get better with time. 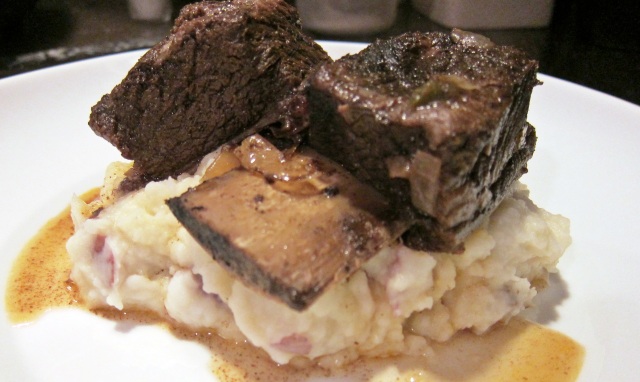 In a glass 13 x 9 inch glass baking dish, such as Pyrex, combine the coffee, vinegar, brown sugar, onion, garlic, jalapeno, bay leaves, paprika, salt and pepper, cayenne and thyme. Add the short ribs and turn to coat, leaving the meaty part facing down in the marinade. Cover the dish with plastic wrap and refrigerate overnight.

The next day take the marinated short ribs out of the refrigerator an hour before cooking them. Place all the short ribs and marinade in your slow cooker and cover. Cook on high for 5 1/2 – 6 hours or low 11 to 12 hours. Both time tables gives you great results, it’s just a matter of how long you want them in for. If you’re home while cooking you might want them done sooner. If you set it and leave for the day the longer time will work for you.

I serve these short ribs over a mound of mashed potatoes with the gravy drizzled over all. Make a green vegetable side dish and your meal is ready.