Posted on February 2, 2014 by Peter Bocchieri

There was a bakery in my Brooklyn neighborhood  called Termini’s Bakery. The store was at 7615 New Utrecht Avenue. Terminis was baking delicious bread, cookies and Italian

specialties decades before I was born. My grandfather used to get his bread from Terminis all the time. There was a woman there that was his contemporary. Sorry to say I didn’t know her name (other than Mrs. Termini). But on a few occasions when I went to pick up bread for my grandfather she knew I was the “butcher’s grandson” and treated me like royalty. Her daughter, which was about my mother’s age, also knew me. They would give me the bread and rolls my grandfather always got and throw in a Taralli Biscotti, which was a plain vanilla cookie ring, or a Regina Biscotti, which was a cookie rolled in sesame seeds. Once in a while I’d get a Lemon Iced Taralli, which was a cookie knot with lemon flavored icing. Half way home the cookies were gone and I would start to eye the tip of the loaf of Italian Bread. I think my grandparents almost expected a piece of the Italian bread to be missing when I brought it home.

Terminis was located under the El (short for elevated railway), convenient for commuters to pick up bread on their way home.  My father would get off the train after work at night and stop at Terminis to pick up the Italian bread for supper. The local bakeries would increase production during the evening commute because they knew people would be picking up fresh Italian bread for dinner.

Termini made the most delicious Italian bread I have ever eaten. It had a unique taste to it, like no other Italian bread I have ever had. I have not found anything like it since they closed. Their cookies were also unique. They made traditional Sicilian cookies but their cookies had a taste all their own. It’s really a shame  when a bakery this good closes and their recipes are lost forever. If there are any living relatives of this family that might have their original recipes I would  love to know about it.

On Saturday the bakery would make their sausage rolls and Sicilian Pizza. When they ran out, that was it. So you had to get there early so you were not disappointed. Their sausage rolls were simple and delicious. It was noting more than a cooked Italian sausage link wrapped in their delicious bread dough and baked till golden brown. No cheese, no peppers, just the great taste of an Italian sausage. Some things should just be left alone.

Like many other things we remember eating as a kid, these sausage rolls were a treat. My mother would on occasion bring some home from her Saturday shopping run. When I was old enough to cross the street I would go there on my own. When I had an extra 50 cents I’d run to Terminis for a sausage roll and a slice of Sicilian. Both were so good you didn’t even need to heat them up. I would eat them cold right out of their display case. They never made it home.

Biscotti Reginella is a very popular and traditional cookie in Sicily. The Sicilian immigrants that came to America thankfully brought this cookie with them.   It’s a simple cookie coated in sesame seeds and baked to a golden brown. They go great with a cup of espresso or a cafe latte, even a glass of Marsala. One of the simple pleasures of life. That’s what good Italian food is. Simple and delicious. 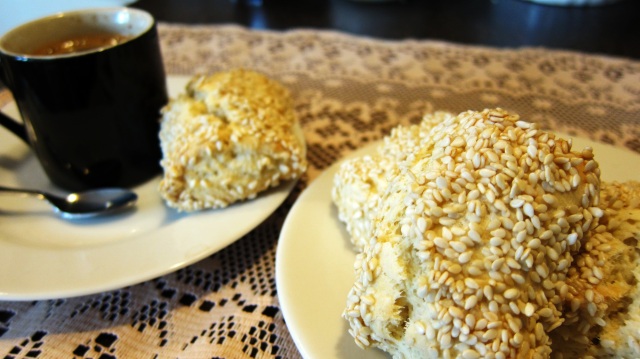 *Flavorings vary from town to town. You can substitute the zest of 1 lemon or 1/4 tsp of saffron dissolved in the milk.

**If you want a crisper cookie you can substitute lard for the butter. I think the butter makes the cookies taste better.

If you have a stand mixer (KitchenAid PRO 500 Series 5-Quart Mixers)  use the flat paddle to mix this up. You can also mix this up with your hands, but that will take a little longer. Combine in a large bowl the flour, sugar, and baking powder.

Cut in the butter until it’s incorporated into the flour mixture. Beat the milk, eggs and salt together. Add the liquid to the flour and mix until the dough comes together. Do not over mix.

The dough should be soft  but hold together. Wrap in plastic and refrigerate for two hours.

Cut the dough into four pieces. On a lightly floured board roll each piece into a log about the thickness of your thumb and 18 inches long. Cut the log into 3 inch pieces. You should get 6 pieces per log.  Brush each piece with milk and roll in the sesame seeds to coat.

Bake in a pre-heated 425 degree over for 10 minuets, then reduce the heat to 300 and bake another 10-15 minuets, or until golden brown. Rotate the cookie sheet half way through so they brown evenly.

Remove the cookies from the oven and allow to cool for 5 minuets before placing them on a rack to finish cooling. Once completely cooled you can store these cookies in an air tight container for at least two weeks. They freeze well for future guests.

Peter was born and raised in Brooklyn, NY and is a second generation Italian-American. He has a degree in Journalism from Long Island University and is an avid photographer, gardener and pet owner. When Peter is not out selling, he is relaxing at his home in North East Pennsylvania and cooking for his sons, Michael and Joseph, family and friends. Peter's passion for food was inspired by his Mother's and Grandmother's cooking, but at the age of 10 Peter felt he could do it better himself, so he did.
View all posts by Peter Bocchieri →
This entry was posted in Dessert and tagged Biscotti Reginella, cookies, giuggiulena, Italian cookies, sesame cookies, Sicilian cookies, Termini's Bakery. Bookmark the permalink.