Posted on January 1, 2011 by Peter Bocchieri

I have been cooking since I was 10 years old. Always loved it. Never even gave it a second thought.  I guess you could say I was a natural, whatever that is. When I see people toil over the idea of cooking or say they can’t cook I never understood that. I started with simple things like breakfast. Watched my mother scramble eggs a hundred times. And one day, I just did it myself. I knew how she made French Toast so when I wanted French Toast I made it myself. Same with pancakes, bacon, sausage, poached egg.  It got to the point when we got up for breakfast and my mother asked my brother and sister and I what we wanted for breakfast, they would put in their orders and I would tell her I’d rather make it myself. I think in the beginning my mother felt insulted that I didn’t want her to make my breakfast, or she thought how novel it was that her youngest would rather do it himself. I enjoyed doing it and liked the way I made it better. My brother and sister couldn’t care less as long as they were served a hot meal and my mother cooked it for them.

I guess cooking comes natural for some people. While others look at it as some form of domestic entrapment. Some people do it very well while others are better off making reservations for dinner.

My brother-in-law Arthur comes to mind as one of those people that should never get close to a pot or stove…for every one’s health and welfare. My sister Annette learned to cook after she got married. I remember for weeks, prior to her wedding with Arthur, running around the kitchen with a note pad and pencil copying down as much as she could watching and questioning my mother and grandmother while they cooked. She had a lifetime to learn this, but took a “crash course” two weeks before her marriage. If she didn’t, no one would have eaten in her house. Which brings me back to Arthur.

I’ll never forget this one summer when my boys and I were spending a week down the Shore with my sister and her family. I had free room and board there because I did all the cooking. That’s the least I could do for a fun filled week down the Jersey Shore. But one afternoon Arthur decided to barbecue some cheese burgers for the kids. I let him. That was a mistake. Arthur has three Masters degrees in I’m not sure what….but he has three master’s degrees. He is not a stupid person. I would call him quite intelligent. So tackling a “manly” duty like a back yard BBQ should be a piece of cake.

My son Michael comes over to me after biting into his cheese burger and spitting it out on the ground. “Dad!”, he said, “there is something wrong with these cheeseburgers”. I looked at him and took the cheeseburger from my sons plate and opened up the bun and looked inside. “STOP EATING THE CHEESE BURGERS!!!!!!”, I yelled. The kids must have thought I was nuts. I was running around the back yard pulling cheese burgers from every one’s mouth. Arthur stood there with the spatula in his hands puzzled by my tirade. “Arthur!”, I said, “didn’t you take the plastic wrap off of the Kraft Singles before you placed them onto the burgers???!!!?????”. Arthur looked at me in puzzelment and said, “The cheese slices have plastic on them?”

Till this day my son Michael has a phobia of plastic wrapped cheese slices. I guess Arthur never made cheese burgers before. Or never handled a Kraft Single. But it didn’t end there.

The next thing Arthur attempted to grill was chicken tenders. Not breasts, tenders. Those little strips of chicken breasts. Now he knew he was going to grill the chicken. Why did he buy chicken tenders?? Do you know how hard it is to negotiate those little thin strips of chicken on the grill? Now, if I was cooking them I would have placed the tenders perpendicular to the grill grates. The space in the grates were a hair narrower than the chicken tenders he bought. They fit on the grate fine when he put them on, but as they cooked and shrunk they started falling into the coals. No, Arthur placed the chicken tenders in line with the grates on the grill and they were dropping like flies into the hot coals. I watched in amusement as Arthur was trying to catch the little strips before they landed in hell. I watched and waited till Arthur looked at me and in total subjugation and defeat said, “Pete, can you give me a hand here”. I’m loosing them all!”

I knew I should have not left Arthur in charge of cooking. I really let my guard down. But deep down I knew this was going to be an amusing afternoon. I didn’t know it could get deadly. After that afternoon I told Arthur he should stick to picking out good crumb cake at the corner bakery and leave the cooking to me. He gladly obliged.

I’m not a vegetarian by the wildest stretch of the imagination. But these meatless meatballs satisfies the best of us carnivores. Served with some lemon wedges and a side tomato salad, they make for a good light supper. 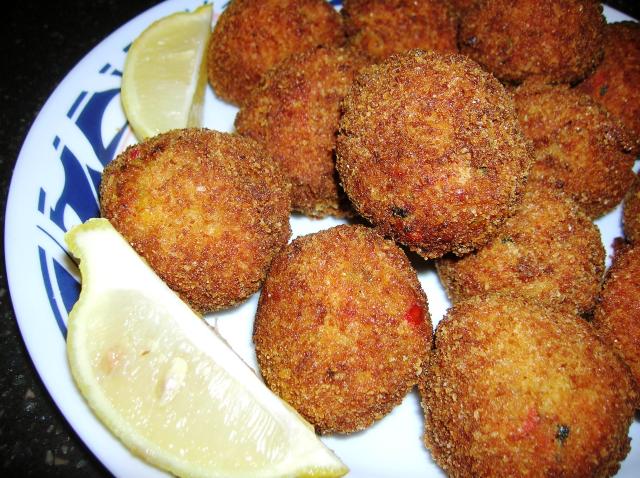 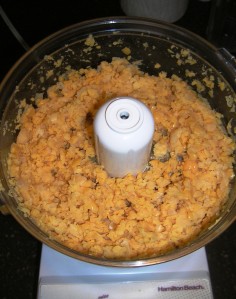 In a food processor pulse the chick peas till they are ground up. Place in a bowl.  Add the zucchini, carrot, bell pepper, garlic and onion to the processor and pulse till the vegetable are ground into small pieces.

In a medium frying pan add 1 tablespoon of olive oil and saute the vegetables till soft. Add salt and pepper to taste.  Add the cooked vegetables to the bowl of chick peas along with 1 beaten egg.  Mix well.  If the mixture is too loose add some plain breadcrumbs.

Beat the other two eggs in a small bowl. Place the bread crumbs into another bowl.

Form the vegetable and chick pea mixture into little meat balls about the size of a  golf ball.  Dip the chick pea meatballs in the beaten eggs with the help of a fork or spoon and then coat them with the bread crumbs, gently forming into a ball.  Place the meatballs on a platter and allow to dry for about 15 minutes before frying.

Heat about 2 inches of canola oil in a heavy pot to about 350 degrees.  Place about two or three meatballs onto a large slotted spoon and ease them into the hot oil. Fry the meatballs in batches until golden. Drain them on a plate with paper towels. 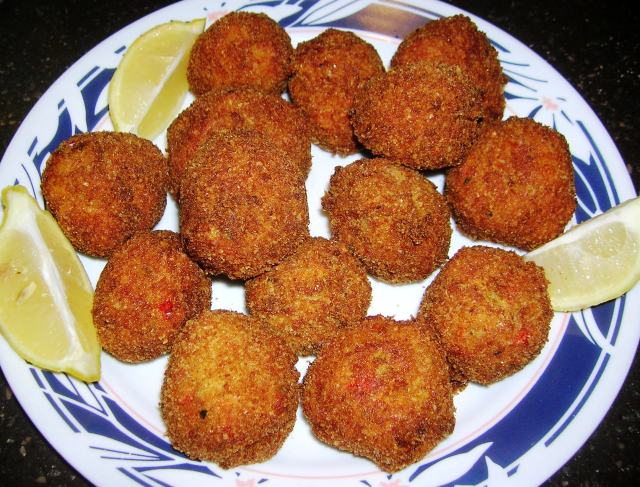 Serve warm with some lemon wedges and sliced tomatoes. Drizzle the tomatoes with olive oil and a sprinkle of oregano and salt and pepper.

Peter was born and raised in Brooklyn, NY and is a second generation Italian-American. He has a degree in Journalism from Long Island University and is an avid photographer, gardener and pet owner. When Peter is not out selling, he is relaxing at his home in North East Pennsylvania and cooking for his sons, Michael and Joseph, family and friends. Peter's passion for food was inspired by his Mother's and Grandmother's cooking, but at the age of 10 Peter felt he could do it better himself, so he did.
View all posts by Peter Bocchieri →
This entry was posted in Antipasto, vegetable and tagged Ceci, Chick pea meatballs, chick peas, meatless meatballs, Polpette di ceci. Bookmark the permalink.