Macaroni with Eggplant – Past alla Norma

Halloween meant different things to me at different stages of growing up on 77 Street in Brooklyn. At an early age, Trick or Treating was one of the most wonderful activities a child could take part in. Going door to door with an empty shopping bag and having it filled with all sorts of candy and treats. It was like being in Willy Wonka land!

The start of the Halloween season would begin when my mother went down to the basement and opened a hugh trunk in the back of the furnace room that stored all the holiday decorations. All the Christmas decorations were at the bottom of the trunk and laying on top were the Halloween decorations of witches and pumpkins and black cats and scary skeletons. As soon as she opened the trunk I would catch a whiff of the pine smell that came from the Christmas tree ornaments that were hanging on last years real Christmas Tree. I knew it was Halloween, but that smell meant that Christmas was not that far behind. We would tape the decorations on the front room windows and hang the paper skeleton on the front door with its arms raised in hopes to scare the children that came trick or treating.

And then came the decision as to what I was going to be that year. I remember going to Woolworth’s on 86th Street and seeing the boxes of halloween costumes lined up on the shelf. I often wondered what it would be like to buy one of those costumes. I only gazed and imagined having that mask on my face of Aquaman, or Yogi Bear or Micky Mouse. And oh! If I can only be Superman. What a fantasy and dream of being able to fly and swoop through the air, over the telephone poles and over the trees and houses. A dream I would have many times as a child. But my mother only came to Woolworth’s to buy some Halloween candy. Our costumes were only of the homemade variety. My mother would say, “you don’t want those costumes”.

“I can make you something much better than that”, she said. “When we get home I’ll put something together for you”.

A pirate was one of my favorite costumes. My mother would pick through the closets and piece together the costume from different articles of clothing. All I needed was a plastic sword and some grease paint to put on my face. But the best Halloween costume my mother ever made for me was a Superman costume. She cut out the “S” out of felt and sewed it to an old sweatshirt I had. I showed her one of the many Superman comics I had so she would get the design just right. It was all coming together. She fashioned the cape out of some red material and together with an old pair of red boots we had in the closet I was beginning to look like the “man of steel”. When I donned the costume for the first time I could hear in the distance,

Up in the sky!

I tried to run as fast as I could through the house so my cape would flap in the wind. I ran out the side door, jumped down the steps, and with my arms raised high in front of me, flew through the back yard. I loved that costume!

When it was time to go trick or treating I got together with all my friends on the block and we started with the house that was right in front of us. One of the great things about trick or treating in Brooklyn was you had housing density. We didn’t need parents driving us around or taking us to shopping malls. On one side of my block alone there were at least  30 houses with two families in each house. An upstairs and a downstairs bell. You do the math. By the time we went up  just one side of the street our bags were full. When we got older and were able to cross the street to hit the other side, well, you can imagine the tons of candy we collected.

I could remember the last time I went trick or treating. And I knew that this was going to be my last year. I was getting to “old” for this sort of thing.  I must have been 11 or 12 years old. That last year I was a hobo.

The following year, we started to do different things for Halloween. For some reason, and I’m not sure why, but  buying eggs and shaving cream became the Halloween thing to do. We must have gotten the idea from the older kids.  Besides eggs and shaving cream we would buy sticks of pastel chalk and place them in heavy socks and beat the chalk against the curb until it turned  into a dust. When you got smacked by that sock you would be marked by a cloud of dust. Of course we would have “wars” with each other and by the end of the night we would be caked in a mixture of eggs, shaving cream and chalk dust.

One year we picked on the wrong group of kids from around the block earlier that evening. At that point we were old enough to be hanging out with some of the older kids. I’m not sure which one of them fired the first shot, but at some point we were all hanging out in the middle of our block and in the distance we heard the roar of a crowd, a very large crowd. At first no one was really sure what was happening. But as we looked up towards the corner of 15th Avenue we saw a stream of bodies running towards us at full speed. I swear, it looked like the start of the New York City Marathon combined with a casting call for William Wallace and his warriors from the epic film Braveheart. Except instead of spears, clubs and swords this angry crowd was packing an arsenal of eggs. There was no end in sight of the egg wielding, pissed off gang of kids that was headed right towards us. We knew we were going to get our asses kicked! We double shuffled in all directions trying to figure out where we were going to run. We all scattered, every man for himself. Some of us ran into the driveways and jumped over the garages in back to get away. Me, Mike Rizzo and Johnny D ran into my driveway. As I fumbled with my keys to get into my house Mike and John were telling me to hurry which made the task of opening my door all the harder. We got into my house and closed the door behind us and ran into my front porch to see what was happening on the street.

One lone soul stood his ground. Richard Carter was the last man standing. But not for long. The mob circled him as he stood nonchalantly against the fence in front of Bobby Agostino’s house. His elbows were resting on the fence behind him with one of his legs crossed in front of the other like he was standing at a pick up bar checking out the babes.

We all gasped while we watched the scene unfold from my porch window and Johnny D said “Holy Shit, Carter is dead!” We felt helpless. We couldn’t hear what was being said as the circle got tighter around Carter. From what we could gather he was negotiating for his life and was probably telling them that he had nothing to do with the attack of their friends from around the corner. He was just hanging out by the stoop.

As far as the invading gang was concerned they were there to take revenge on whoever messed up one of their own. No matter who it was. And in this case it didn’t matter who it was. Carter was the only target they had and these eggs had his name on them.

I never saw a human omelette before, it was a sight to behold. Carter stood there and took it like a man as each of the 300 fired at will. For good measure they threw some eggs at the parked cars and houses as they finished their raid. And when every egg was unloaded, they left.

Carter was not a happy camper when we all resurfaced and joined him. We thought he was nuts for standing there but when you think about it, it could have been a lot worse. They could have been hard boiled eggs.

When I was 14 years old and traveled throughout Italy with my brother Richard we spent two weeks with my Aunt Angie and Uncle Benny in Sicily. We stayed at a small family run resort near the seaside town of Riposto not far from Taormina.

A memorable dish they served us for dinner one night was a plate of macaroni with a slice of fried eggplant draped over the top. I never tasted something so wonderful in my life. The macaroni was dressed with a simple light marinara sauce made of fresh tomatoes, garlic and basil. And sitting on top of the plate of pasta was two fried slices of eggplant. It couldn’t be more simple than that. We cut the eggplant into the macaroni and sprinkled on some grated cheese. I’ve been making it that way ever since. 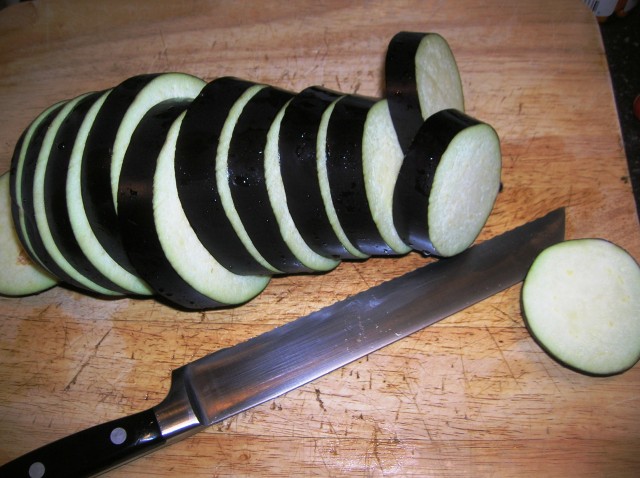 Place the sliced eggplant , with the skin on, in a colander and sprinkle each layer with kosher salt. Put a plate on top of the eggplant with a heavy weight on top and allow to sit for at least an hour. 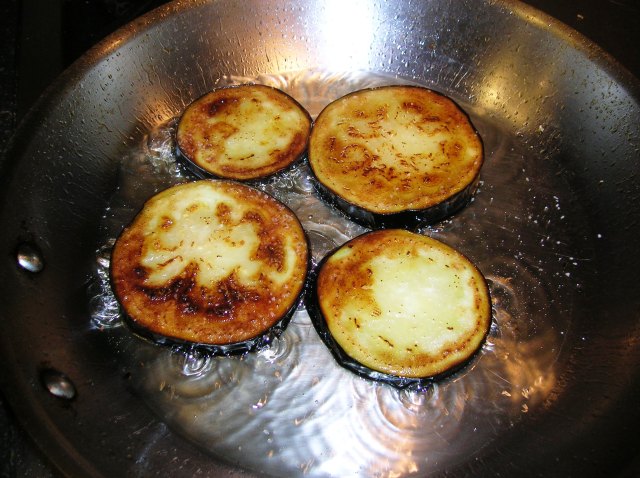 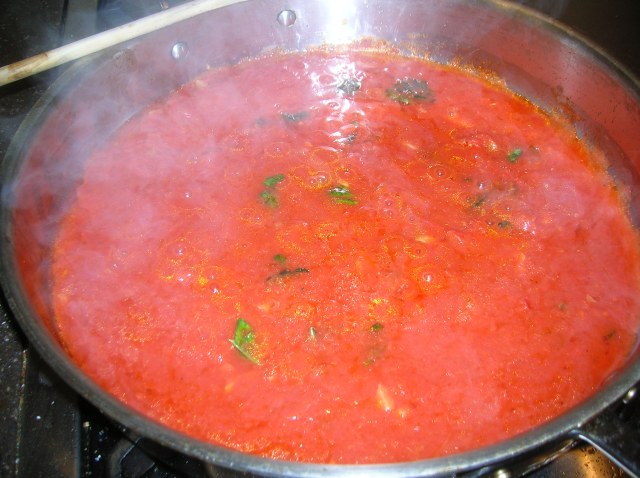 In a large sauce pan, heat 4 tablespoons of olive oil. Add the chopped garlic and cook till the garlic is golden. Add the chopped tomatoes, sugar, salt and pepper and let the sauce simmer for about 15 minutes.

In the mean time, in a large pot boil 5 quarts of water. Add the  macaroni and cook till al dente.

When the sauce is cooked turn off the heat and add the torn basil leaves. Drain the pasta and add it to the pan with the tomato sauce. Toss the pasta to coat it well. You can leave the pasta in the pan for a few minutes. The starch from the pasta with thicken the sauce a bit.

Serve the pasta in large bowls and place two slices of the fried eggplant on top of the macaroni. Serve with plenty of grated Romano cheese.

Peter was born and raised in Brooklyn, NY and is a second generation Italian-American. He has a degree in Journalism from Long Island University and is an avid photographer, gardener and pet owner. When Peter is not out selling, he is relaxing at his home in North East Pennsylvania and cooking for his sons, Michael and Joseph, family and friends. Peter's passion for food was inspired by his Mother's and Grandmother's cooking, but at the age of 10 Peter felt he could do it better himself, so he did.
View all posts by Peter Bocchieri →
This entry was posted in Pasta and tagged macaroni, macaroni with eggplant. Bookmark the permalink.