Posted on September 14, 2010 by Peter Bocchieri
The aroma that goes through the house when you cook this dish will have them come running for dinner before the dish is done! The best kind of pepper to use for this dish are hot cherry peppers in vinegar. For those who cannot take the heat you can also use mild banana peppers in vinegar. As a compromise you can use half and half. If you are using hot cherry peppers, slice them and remove the stem and seeds. That will hold down the heat a bit. The potatoes are a great addition because they absorb and cut some of the vinegar and taste great. 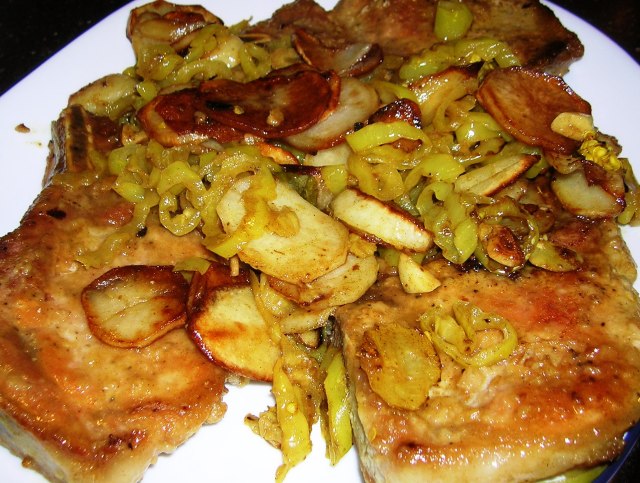 In a medium frying pan, fry the potatoes in half the oil till golden brown and tender. In a separate large frying pan, heat the remainder of the oil.

Salt and pepper your pork chops and dredge the pork chops in the flour, shaking off any excess flour.

When the oil is hot, with the heat high, brown the pork chops about 3 minutes each side.

Add the garlic and shake the pan to incorporate with the pork chops. Cook about 1 minute.

Add the peppers, reserving the vinegar they came in. Turn and cook the peppers with the pork chops for two minutes. Add the fresh basil and the reserved vinegar from the peppers.  When the pork chops are done, do not over cook, remove them from the pan and place on a platter and keep warm.

Add the cooked potatoes to the vinegar pepper mixture and toss to mix well.

Cover the pork chops with the potatoes and vinegar peppers and serve immediately.

Peter was born and raised in Brooklyn, NY and is a second generation Italian-American. He has a degree in Journalism from Long Island University and is an avid photographer, gardener and pet owner. Now that Peter is retired, he is relaxing at his home in North East Pennsylvania and cooking for his sons, Michael and Joseph, family and friends. Peter's passion for food was inspired by his Mother's and Grandmother's cooking, but at the age of 10 Peter felt he could do it better himself, so he did.
View all posts by Peter Bocchieri →
This entry was posted in Pork and tagged pork chops, pork chops and vinegar peppers, pork chops with vinegar peppers and potatoes, The best pork chop and vinegar peppers recipe. Bookmark the permalink.

10 Responses to Pork Chops with Vinegar Peppers and Potatoes