Sunday was a special time around our house. We would get up early to go to Mass and if we weren’t planning on visiting relatives we would be looking forward to “Sunday Dinner”. Back then you couldn’t eat before Communion so by the time you got home you were starving. And if you happened to stop off and pick up a loaf of fresh Italian bread from the neighborhood bakery, you better have bought two – one for the walk home and one for the family!
On Sunday my Grandfather Pietro Verga always wore a suit. Complete with tie and vest. And on Sunday he would wear his “special” Sunday hat. I could still see him walking home from church with the Italian Newspaper under one arm and a loaf of bread under the other. When he got home from church he would take off his jacket and hat but never took off his tie or vest. Sunday was a special day. Grandpa would sit in the parlor reading his Sunday paper, Il Progresso,or if it were a nice day, out on the porch. Grandma would be clanking around the kitchen with her pots and pans preparing her Sunday dinner. Dinner for us on Sunday was 2-3pm in the afternoon.
By 11 am or so either my Mother or Grandmother would start making the Sunday Gravy. I could never forget the warm sweet smell of the sauce cooking on the stove top. Chock full of beef, pork, sausage…sometimes meatballs, brocciole, rolled up pig skin or pig’s knuckles. Most Sundays we would have macaroni. On special Sundays we would have ravioli, cavatelli, manicotti. All smothered in that delicious sauce. But I’m getting ahead of myself. I wanted to talk about “Grandma’s Chicken”. That’s what we would call it. My brother and sister and I would stop whatever we were doing to get a piece of that chicken. I think my Grandfather would buy extra, knowing he would have to be sharing it.
Once again, Grandma made something so delicious from such a simple recipe. I believe it was in her technique so I’ll tell you exactly how she did it. Nothing was ever written down, I give you this from memory and experience. My Grandmother cooked this chicken by broiling it. She used to have one of those free-standing broilers, the one that had an electric heating element on top and did nothing but broil food. It wasn’t a toaster oven or rotisserie cooker, it was a broiler. If you don’t have that equipment, don’t worry, the oven broiler works just fine.
Grandma’s Chicken

Chicken Legs and thighs
If you like white meat, by all means use it. But in our household, dark meat ruled!
1 whole lemon
Salt
Soak the chicken in heavily salted water for about 1 hour.
Drain and rinse the chicken in cold running water. Pat dry.
. 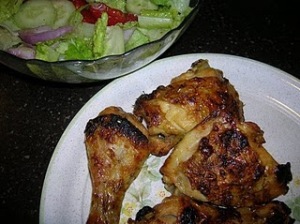 My Grandmother would always serve this with a large lettuce and tomato salad with olive oil and vinegar, and of course, a loaf of Italian bread.

Peter was born and raised in Brooklyn, NY and is a second generation Italian-American. He has a degree in Journalism from Long Island University and is an avid photographer, gardener and pet owner. When Peter is not out selling, he is relaxing at his home in North East Pennsylvania and cooking for his sons, Michael and Joseph, family and friends. Peter's passion for food was inspired by his Mother's and Grandmother's cooking, but at the age of 10 Peter felt he could do it better himself, so he did.
View all posts by Peter Bocchieri →
This entry was posted in Chicken and tagged Chicken, lemon, lemon chicken, poultry. Bookmark the permalink.