My Grandfather had a cast iron stomach!

God bless them, both my Grandparents lived well into their 90’s. They worked hard all their lives. My Grandmother, in addition to raising a family, my mother Rose and my Uncle Sal, she always helped my Grandfather at the butcher shop. At one point in his life my Grandfather had three butcher shops going at one time. As an immigrant with a 6 th grade education he certainly knew how to run a business.


Now, one would think that a butcher’s family would eat nothing but the best cuts of beef. Not true…he saved that for his customers. Till this day my mother complains (at the age of 92) that we never had a good steak in the house. I have to tell you though, when my Grandfather ate steak it would only be “Chuck Steak 1st Cut – Bone In”. I would challenge him with other cuts of beef, like Rib Steaks, or T-Bone Steaks, or Fillet Mignon. He would always say in his authoritative voice. “NO! chuck-a steak is-a the best.” Maybe it’s the fat content, maybe it’s the bone. But for his money, that was the best steak he would buy. That was the only steak he would buy! He was very particular about the meat he ate. I remember him telling me to never eat a hamburger in a restaurant. Now this was before McDonald’s became a national sensation. He would say you never knew what they would put in the chopped meat. I’m sure he knew something non of us ever wanted to know. Other than that, I never knew my Grandfather to restrict his diet. He ate all the beef with all the fat and the chicken with the skin, and Italian sausage, and pigs feet and knuckles and pig’s skin. He would make today’s “health Gurus” die of a heart attack. Yet he lived almost a century. Did I mention he smoked?


I’m sure his longevity was due to both genetics and lifestyle. His secret? Lord only knows. I could tell you what he ate for breakfast everyday, religiously. Every morning he would have 1 soft-boiled egg, a bowl of coffee, not a cup, a bowl, with about 3/4’s of it milk, a slice of toasted bread and a half a grapefruit. He would have a glass of wine with lunch and dinner, and in the mid morning a shot of sweet vermouth. Hey, it worked for him!


So, let me get to the wine and beef. This dish combined  both. Whenever my Grandmother Lily made this dish I would instinctively know it and rush upstairs to get my taste. Again, a very simple recipe with wonderful results.


Here is what you’ll need: 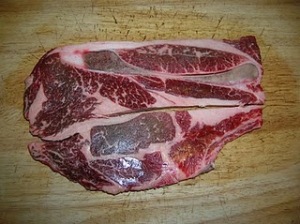 
You can use prepared Italian seasoned bread crumbs but I prefer to make my own. To about 1 1/2 cups of plain bread crumbs add 1/2 cup grated cheese ( Romano), one clove of garlic finely chopped, 2 tablespoons of chopped flat leaf parsley, 1/2 teaspoon of salt and 1/4 teaspoon of pepper. Combine all ingredients well.

If you are using the Chuck Steak remove the bone.

In a large bowl place the steak. Cover the steak with the red wine and sprinkle about a teaspoon of garlic powder over the steak. Allow the steak to marinade in the wine for about 5 minutes, no more. 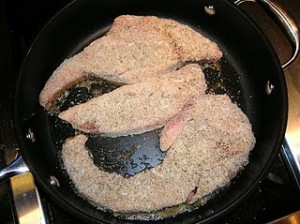 In the meantime heat a large non stick frying pan over medium heat. Add about 4 tablespoons of olive oil to the pan. Before the oil starts to smoke add the steak. Depending on how well done you like your steak, a half-inch thick cut of meat should cook about 5 minutes on each side for medium. 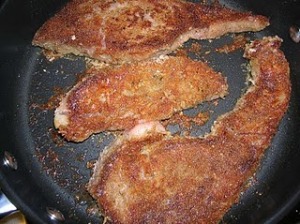 Turn the steak only once to avoid the breadcrumbs from falling off. Add a sprinkle of salt at this point. 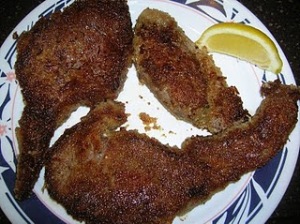 Peter was born and raised in Brooklyn, NY and is a second generation Italian-American. He has a degree in Journalism from Long Island University and is an avid photographer, gardener and pet owner. When Peter is not out selling, he is relaxing at his home in North East Pennsylvania and cooking for his sons, Michael and Joseph, family and friends. Peter's passion for food was inspired by his Mother's and Grandmother's cooking, but at the age of 10 Peter felt he could do it better himself, so he did.
View all posts by Peter Bocchieri →
This entry was posted in Beef and tagged breaded, breaded steak, Steak, wine. Bookmark the permalink.