This spinach filled mpanada was another staple for Christmas Eve dinner. Along with the broccoli pie and scaciatta, these savory pies were always a big hit. Whatever we didn’t finish on Christmas Eve was always on hand for breakfast the next morning along with my grandmothers home made Sicilian pizza. We would take them out of the refrigerator before we opened our gifts and in between tearing open the packages we would take a piece out of the foil and enjoy them. Who had time to make breakfast when we had these delicious treats all ready to go. They were as good, if not better, the next day. My grandmother would never let anything go to waste. If one of us just ate the filling and left the crust of the mpanadas or pizza around my grandmother would take them from our plates and eat them herself. She just loved the crust! Another great Christmas morning left over we craved was my Aunt Mary’s cassata cheese cake. That was great with a cup of morning coffee.

Eating all those leftovers gave my mother and aunts enough time to start preparing our Christmas day dinner. It was a two day Christmas food fest. We were always too busy playing with our new toys and games to be aware of anything else that was happening around the house. But miraculously a Christmas day dinner appeared on the table when mid afternoon came rolling around. And we started eating all over again. What a great holiday! 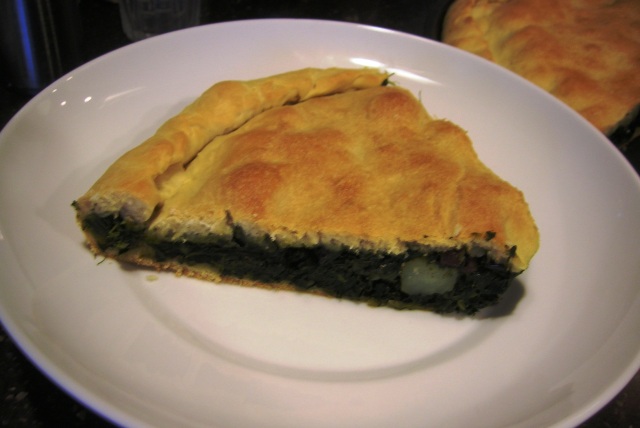 Put the yeast, sugar, and water into a small bowl. Stir and let rest for 5 minutes.

Mix flour and salt in a large bowl . Add the olive oil to the yeast mixture and pour into the bowl with flour.

Stir and work into a dough.

On a lightly floured surface, knead the dough for at least 8 minutes, or until smooth and silky. Add some extra flour if dough is too sticky. Shape the dough into a ball. Lightly oil a bowl. Place dough in oiled bowl to coat one side then flip dough over to coat the other side. Cover with a dish towel and put in a warm place for 1 hour, or until doubled in size.

Wash the potatoes and cut them in half. Place the potatoes in a pot and cover with cool water. Place on medium heat. When water comes to a boil cook for 20 minutes. Cool slightly and peel. Cut into small cubes.

Boil the spinach in small amount of lightly salted water for 4 or 5 minutes. Drain the spinach well and after it’s slightly cooled squeeze out most of the liquid with your hands. Coarsely chop.

Heat olive oil in a saucepan and add the spinach and garlic. Let the mixture saute  for 10 minutes, stirring occasionally. Add the potatoes, red pepper flakes and olives and stir gently for 5 minutes.  It’s ok for some of the potatoes to be mashed into the spinach, it’s actually desirable. Taste for salt. Put the mixture into a bowl and set it aside , stirring to cool.

When the dough has risen, preheat the oven to 425 degrees. Punch the dough down and divide in half. Roll each half into a 9-10 inch circle.

Lightly oil a baking sheet. Put 1 circle of dough onto the baking pan. Evenly spoon the spinach mixture over the dough to within one inch of the edge.

Place the second circle of dough over the filled half. Brush the edges lightly with some water.  Seal the edges securely by pinching and folding them together. Brush the top of the mpanada lightly with oil and make a couple of slits on top to allow steam to escape. 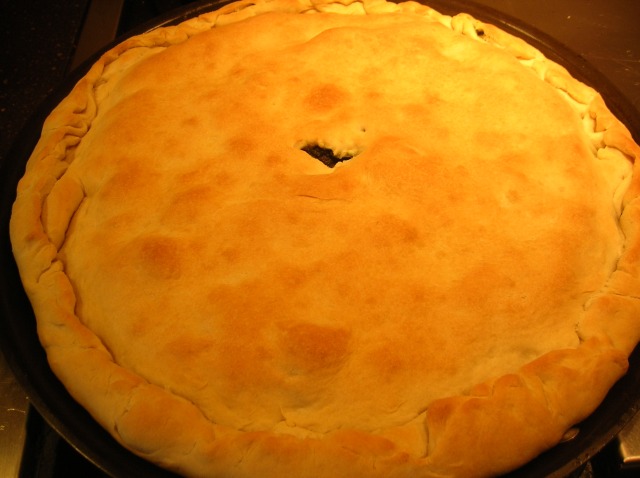 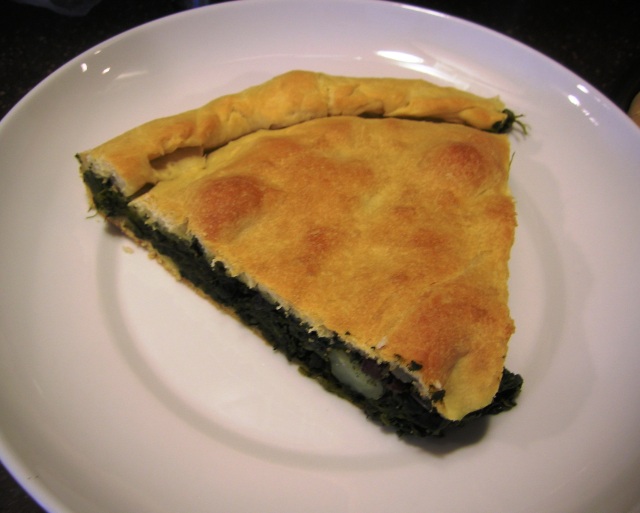 Peter was born and raised in Brooklyn, NY and is a second generation Italian-American. He has a degree in Journalism from Long Island University and is an avid photographer, gardener and pet owner. Now that Peter is retired, he is relaxing at his home in North East Pennsylvania and cooking for his sons, Michael and Joseph, family and friends. Peter's passion for food was inspired by his Mother's and Grandmother's cooking, but at the age of 10 Peter felt he could do it better himself, so he did.
View all posts by Peter Bocchieri →
This entry was posted in Antipasto, pizza, vegetable and tagged mpanada with spinach, spinach mpanada, spinach pie, Stuffed breads. Bookmark the permalink.